Citation for Long and Valued Service to the Assembly, 2009 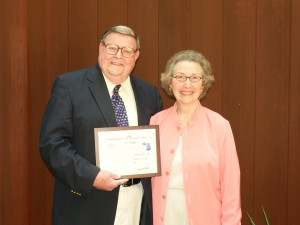 There is an amazing amount of volunteer activity that turns the Congregational Summer Assembly from simply a beautiful summer vacation spot into the strong, supporting community we all love. Each year we recognize a person or couple whose contributions over the years have been extraordinary and I get to tell you about them. Several years ago in the Sunday comic section of the newspaper there was a large picture of a forest. From within and all around the forest bars of symphonic music rose and swirled in joyous profusion as one small figure stood in front waving a baton. In the corner one man said to another: “It’s always in there – it just takes someone special to bring it out.” Among the things that are “always in there” here at the Assembly are our love of music and our love of our shared history. So it is especially fitting that we present the 2009 Citation for Long and Valued Service to the Assembly to two people who are specially gifted at bringing those things out for all of us to enjoy – Jim and Tamara (always Tammy to us) Transue Royle.

I’ve known them for years and thought I knew them – but here is some of what I have learned.

The Transue family first came to Crystal Lake from Flint in the late 1940’s at the invitation of friends and they stayed at the Northway Hotel in Beulah. Realizing that this was an ideal place to bring a family during those years when polio epidemics kept children away from city parks and pools they bought the cottage at the west end of Crystal Lake called “The Hermitage.” They returned every year and until their teens Tammy and her sister Andrea’s attentions were focused on the Junior Fleet at the Yacht Club. But at age 15 Tammy was invited by her friend Mary Alice Clarke to sing with her in the CSA Choir and that was the beginning of an enduring involvement with the Assembly. So music introduced Tammy to the Assembly.

Music also introduced Tammy to Jim – on their second day on campus as freshmen at Albion College when they were both auditioning for the college choir. A 4 year college romance ensued followed by a wedding a few weeks after graduation. That first summer Jim was a counselor at a camp on a small lake down state. He was invited to visit the Transues over a weekend and was overcome by the size, color and clarity of Crystal Lake – and he joined Tammy in the choir. In the 50 years since they have been regular members of the choir and often sang duets for the offertory. In 1992 they were delighted to move into their own cottage just up the hill from the Meeting House which they named Ritornello, a musical term meaning “a little return.”

Much of what they have done for the Assembly has been as a couple but each of them has established a unique role as an individual. Tammy was an elementary school teacher in the 60’s but turned to volunteer work early and enthusiastically while raising Tim, Mike and Megan. She directed the Primary Choir of the First Congregational Church in Saginaw for 22 years, served on the Albion College Alumni Association Board of Directors, and was named a Saginawian of the Year in 1993.

At the Assembly the choir was only a starting place for her. She was on the Women’s Association Board, serving as President in the 80’s, and has co-chaired the Artists and Artisans event where she and Marjorie Butler have regularly played piano duets as background music. She is well known for the letters and notes she writes (by hand – on paper – with a pen!) to acknowledge, thank, encourage, support – and she even presented an Adult Workshop on the Joys of Letter Writing. She has helped with children’s operettas both as a producer and as a director and was one of the founders of the classic CSA singing group “The Naughty Nine.” Tammy was on the committees planning the 75th and 100th Anniversary celebrations and spearheaded the Assembly cottage histories project.

After serving as Assistant Archivist for 7 years, in 1998 she was appointed official Assembly Archivist by the Board. During her tenure there have been many wonderful developments – especially the evolution of the former Manager’s Cottage into Pilgrim Place – the home of the archives and a little CSA museum, and a wonderful meeting place. We all know of the fire that damaged and could have destroyed Pilgrim Place in May of this year. While other volunteers have been cleaning and painting, Tammy has gone ahead undaunted with her plans for this year’s History Night – promotional note: it will be this Friday night, August 7. Her sense of humor that becomes evident in the Archivist’s reports at the Annual Meeting always causes the committee chair who follows her to call her “a tough act to follow.”

But Tammy will say without reservation that the best thing she ever did for the Congregational Summer Assembly was to marry Jim Royle. A clinical child psychologist, he served as director of the Saginaw Valley Child Guidance Clinic, then for 20 years was director of a regional educational facility for students with special needs. He now holds a full-time professorship in special education teacher preparation at Saginaw Valley State University.

He has been an integral part of CSA musical productions for over 30 years playing, among other roles, a memorable Jud Fry in “Oklahoma,” Wilfred Shadbolt in “Yeoman of the Guard,” Mr. Bumble in “Oliver,” and Teyve in “Fiddler on the Roof.” Some of his favorite moments include singing a duet with Ken Cox in “Pinafore,” trying to upstage Steve Elrick in numerous comedy roles, and partnering many times with Linda Schopp. He continues to be involved as a stage director in the operettas year after year.

But there is another side to Jim’s volunteer commitment to the CSA. After serving on several committees over the years including the Nominating and Personnel Committees, he became a Trustee and then President of the Board of Trustees in the 1980’s. After his term ended he became a trustee of the Pilgrim Fund which he currently chairs.

If Tammy’s humor is that of the historian, Jim’s is that of the stage performer – larger than life in every way – as anyone who saw him playing doubles with Steve Elrick will attest to: Steve in his buffalo horn helmet and Jim wearing his orange dress from “Finian’s Rainbow” with a shiny blonde wig.

As with so many of our CSA volunteers, the months away from Pilgrim are equally filled with service and last fall Tammy and Jim became the first alumni couple to be jointly inducted as distinguished alumni at Albion College.

So if you find that memories of music stir with the leaves of the trees, you can be sure that much of that music was created by and the memories of it are safely stored by the Royles. Tammy and Jim, we thank you for all you have given us. Your names are engraved on the plaque at the back of the Meeting House and your friends can greet you after the service to thank you in person.