Citation for Long and Valued Service to the Assembly, 2014 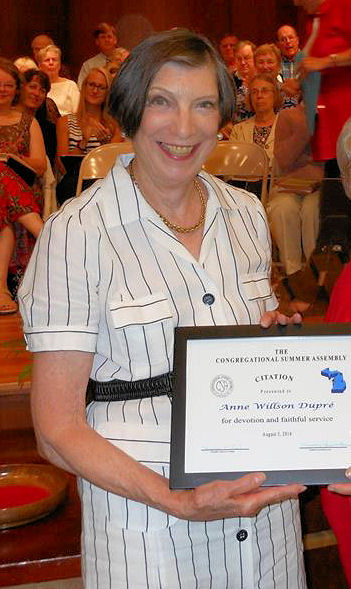 On Sunday, August 3rd we gave Anne Wilson Dupre the 2014 Citation for Long and Valued Service to the Assembly. Thank you Anne for exemplifying the spirit upon which the CSA was founded!

In 1913 Edgar and Lola Armstrong drove north from their home in Fenton, Michigan, because he had decided a cherry orchard would be a good thing to invest in. After several days they discovered the very young Congregational Summer Assembly, said “Let’s forget the cherry orchard!’’, and bought property here at what is now the corner of Edwards Avenue and Fairchild. Soon they built their cottage and named it “Woodway.” Succeeding generations of the Armstrong family, including Maurice and Daphne in the 5th generation, have summered in that cottage and from the beginning there were usually three generations living together. (Anne’s cousin, Nancy Clapp Martinez, recalls sleeping in the attic with Anne, listening to the adults as they sat around the fire below.) Anne’s mother, Margaret Starr Willson Leutheuser, is 101 now and was here every summer of her life until traveling became too arduous.
Anne grew up in Philadelphia and during her teens took part in a program developed by the Quakers that helped young people learn how to volunteer effectively. As we will see, in Anne’s case this program was extraordinarily effective.
After earning her Bachelor of Arts degree in Political Science at Brown she went to Harvard where she was administrative head of the honors program for government and economics. The head tutor for government was the close friend of a brilliant young Canadian with a Ph.D. in government and economics named Stefan Dupre. The friend called Steve and said “Wait till you meet Miss Willson - you’re really going to like her!" He did. During their 50+ years of marriage they lived in Toronto and she devoted her intelligence, energy, and knowledge of how to volunteer effectively to community initiatives that seek to improve the quality of life of children, especially with regard to mental health concerns. In pursuit of those goals she has chaired countless major boards and committees in Toronto and Ontario, often as the first woman in that capacity, and she has a long history of association with important mental health projects. For twenty years she has been a strong voice for ethics in medical agencies, hospitals, and mental health centers. The range and the depth of her volunteer activities in Toronto is quite extraordinary and she has been recognized with the Ontario Volunteer Award, the Junior League of Toronto Award of Excellence, and the Frederick G. Gardiner Award, Metropolitan Toronto Citizen of the Year.
Anne has always worked very hard during the year and would arrive at Woodway with the feeling that many of us have: "At last! Let me just sit - take a long walk - see my friends.” But she also recalled the wonderful days of her childhood here when she and her friends were free to wander the woods and beaches and felt nurtured by the community. Because she values this community she has always volunteered her knowledge and her time to support the CSA and help maintain that sense of safe freedom she experienced growing up here. She has served as a Trustee and on the Nominations Committee to find new Trustees; she was first a member and then chair of the Research and Resources Committee and a member of the Budget Committee. For thirteen years Anne was on the Membership Committee, for 3 years as its chair, and during that time she was also on an ad hoc Voting Rights Committee established by the board. She was on the Long Range Planning Committee and - as the CSA started its slow move into the 21st century - she served on the Computer Committee. For the last several years Anne has been on the By-Laws Committee where her broad and deep knowledge always helps to clarify the issues. She clearly knows more about the things under discussion than most committee members but always manages to make you feel that, of course, you knew that all along. Somehow things seem to go on more smoothly after her input. She may have wanted to just sit and relax - and she is quick to say that she does do that - but she has continued to stay actively involved. And she has pulled her share of garlic mustard! As we have passed the halfway point in the summer season of 2014 and can see the signs that our Brigadoon will be disappearing into the mists again we are thankful for the insights and sense of order imparted by Anne over the years that give us confidence that next year, when we are ready, the doors of the CSA will open for us. Thank you, Anne, for your service to the Congregational Summer Assembly. Your name has been engraved on the plaque at the back of the Meeting House. Everyone is invited to greet Anne and thank her in person at the end of the service.