Citation for Long and Valued Service to the Assembly, 2011 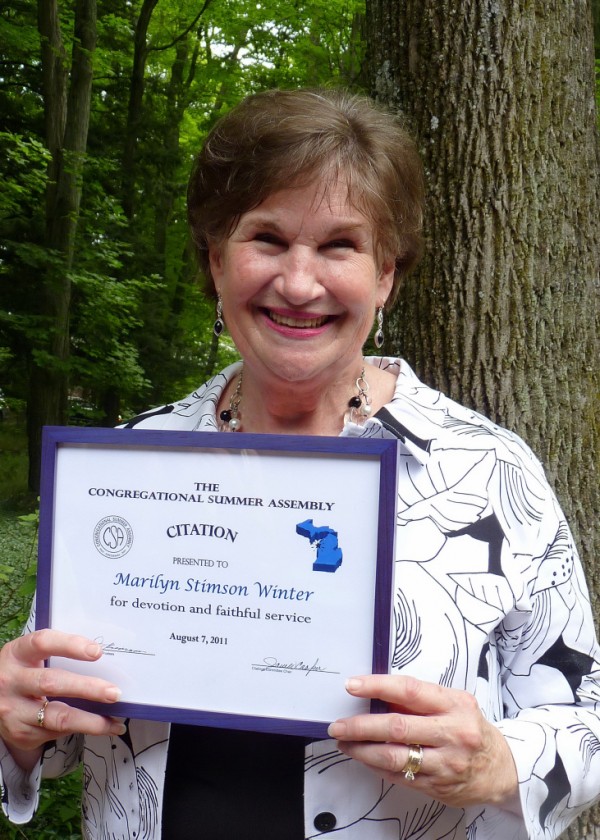 Each year the Citations Committee reflects on the generous sharing of time and talent by members of our community and introduces one of those individuals to you.  Sometimes we learn of contributions that are quiet and behind the scenes – sometimes they are out where everyone is aware of them.  In the process we discover many things about what makes the Congregational Summer Assembly such a special place for all of us – and one of these things is how the concept of service to the community is a family value that is carried out from generation to generation.

The person we recognize this morning spends so many hours of each summer here in the Meeting House that a lot of people think she’s part of the paid staff.  And she is so closely identified with music that many people have no idea how much she does and has done here that has been totally unconnected to music. So I look forward to telling you more about her – MARILYN STIMSON WINTER.

It’s impossible to tell the story of Marilyn’s involvement in the Assembly without acknowledging her parents, Dr Edward Stimson and Emily Maclean Stimson.  They were larger than life in more than height and and are rightly seen as the role models for their three daughters – Kay, Marjorie, and Marilyn -  in representing what the Assembly is all about.

Marilyn was born the youngest of the three in Cincinnati, OH.  As her father accepted the call from Presbyterian churches in new cities the family moved to Galesburg, IL; Sioux City, IA; back to Cincinnati; and, finally, when Marilyn was 10, to Omaha, NB, where they remained.  A cheerleader in high school, Marilyn went on to Northwestern University where she was on the Pep Squad.  Anyone watching her get scores of children engaged during operetta practices can see that as a natural progression.  Who hasn’t heard this:  clap clapclap clap clap – clap clap? At the beginning of her junior year Marilyn transferred to Occidental College in Los Angeles where she went into music, stayed for a Masters in Voice with a Minor in Theater, and met Brian Winter.  Together they continued their education in music at the University of Illinois in Champaign-Urbana.  Marilyn taught 4th grade while also earning her second Master’s Degree, in Vocal Performance, at Illinois.  Then followed Enid, Oklahoma, and several years of traveling in a kind of educational triangle:  Illinois, the University of Arizona, and Alma, MI – with both of them teaching and continuing work on their Doctor of Musical Arts in Voice programs.  Brian completed his in 1981 and Marilyn in 1982.  In 1983 they moved to Austin, Texas, where he was Director of music at the Methodist Church. Marilyn conducted 5 choirs at the Presbyterian Church and taught grades 1-6 plus  K – 12 vocal music.  In 1999 they moved to Severna Park, MD, where they have lived ever since.

That was a lot of activity out in the “real world.”  What about the Congregational Summer Assembly – our real world?  In the mid-40’s Dr. Stimson and Dr. John Lukens were both Presbyterian ministers in Cincinnati and were friends.  The Stimsons had vacationed in the Charlevoix area but were looking for a summer location more suited to the children.  Dr. Lukens had told Dr. Stimson many times how great the CSA was.  As Ruthie Lukens tells it, one summer morning in 1946 she and her parents were sitting at the table in the cottage, when all of a sudden they heard loud steps clumping across the porch, and a huge booming voice saying, “We’re here!”  Needless to say, her parents were panic stricken, especially her mother, thinking he meant “We’re here – to stay – with you”– in their small cottage!  Actually the Stimsons had rented a cottage – and beautiful Crystal Lake plus the atmosphere at the Assembly immediately captured them.  The next year they rented one of the Steele cottages and were “July people” for several summers before buying the last lot available on the east side of M-22.  In following summers they sort of camped out in the very basic structure that was erected while Dr. Stimson completed much of the work himself.

That began the real involvement in CSA activities – in operettas, Stunt Nights, and plays: “Cinderella,” “Ojibway Legend,” “Smokey Mountain,” “The Night of January 16th.”  Marilyn worked as a waitress in the Dining Hall and, after it closed, at the Crystal View when it served sit-down meals.  She also worked as Mr. Pope’s assistant in the Post Office.

During her college years she helped Emilie Williams with “Hiawatha,” teaching the children the music; and with the Monday night children’s dancing – subbing for Emilie at the piano on occasion.  She started singing in the CSA Choir at age 11 and sang many offertory solos and duets over the years.  After her marriage she and Brian also did recitals for the Assembly community as their daughters were to do later.  She worked on children’s operetta costumes for several years, then took on the Music Director’s role with Pandora in 1986.   For many years she either sang a major role, did the conducting or was the musical director of the adult operettas: “The Gondoliers,” “ Brigadoon,” “Flower Drum Song,” “Fiddler on the Roof,” “ Oliver” (in which, as the undertaker’s wife, she fell into the coffin!).  Marilyn has always been one to take her work very seriously and herself very lightly which is a wonderful pairing of qualities – so no one who saw “Road to Dunsinane” can ever forget her “heroic soprano” presentation of Lady MacBeth in gold breastplate and horned helmet.  Recently, in what she calls her “post ingénue period,” she played the wonderfully comic role of Sister Mary Regina, the Mother Superior, in both presentations of “Nunsense.”

While she has been the Music Director of many adult operettas, her first love has been being Music Director of the children’s operettas which she has continued to do since 1986.  For the last 25 years you have been able to find her every day during the 2 weeks before the show, working not only with the whole cast but with individuals and small groups – giving the equivalent of hundreds of mini private voice lessons – encouraging the timid, calming the anxious,  developing the abilities and the self esteem of the novices.  It has been a wonderful gift to all of us and to all of our children.  What the casual observer might describe as a form of masochism Marilyn describes as “just fun.”  In her words “It’s just fun to help people do things they never thought they could do.” And in recent years she has also started writing new songs to add to the shows.

But Marilyn has always had a deep feeling of responsibility for the non-musical side of the Assembly – those tasks that keep things running and that both reflect and direct the way our values and mission are carried out day by day as a community.  She was on the Youth Committee for several years and was instrumental in first providing a Staff Dinner in thanks and appreciation for their work.  During the years of the big teen dances she sacrificed her hearing to act as a chaperone.  Marilyn served on the Board of Trustees and was Vice President of the Board.  She has been a member of the By-Laws Committee for many years.  And she provides a long institutional memory for the Membership Committee having served as a committee member, as the committee chairman, and now again as a member.  Even when she is in the midst of rehearsals she comes to the weekly meetings and is never at a loss for words.

So, Marilyn, your parents represented for you what the Assembly is about – but over the years you have represented for hundreds of young people what it means to serve the community you are part of with joy.  Your name has been engraved on the plaque at the back of the Meeting House and everyone can thank you personally after the service.

Citation for Long and Valued Service to the Assembly, 2012 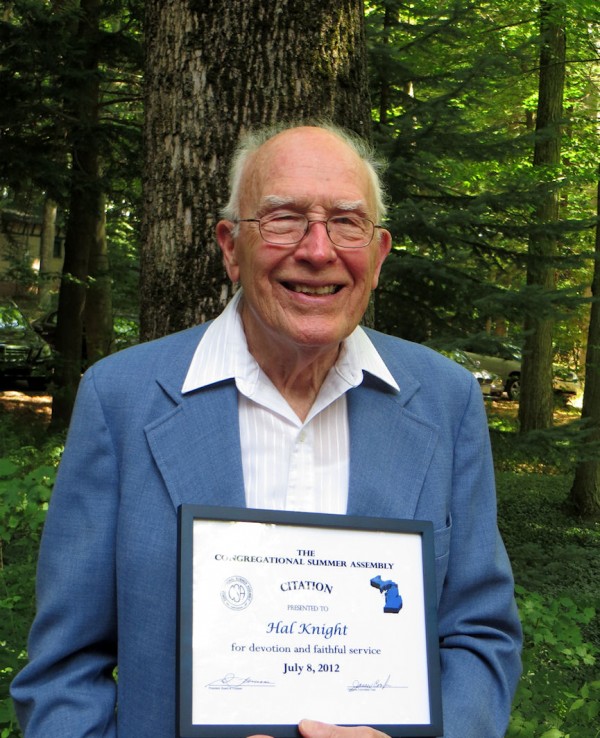 The Congregational Summer Assembly continues to be the place we love and want to return to year after year largely because this community in the woods between two beautiful lakes has so many wonderful people who volunteer their time and talent for the good of all of us.  The Citations Committee is privileged to learn about these contributions, to get to know more about these wonderful people and each year to let you know more about the one who receives the Citation for Long and Valued Service to the Assembly.
We live in an era that seems to be consumed with instant transmission of information, with what is new or “just about to happen” seeming more valuable than what has already happened.  But in the lounge of the Community Building a lovely quilt hangs on the wall that was made as part of our Centennial celebration.  The centerpiece is a beautifully stitched picture of the Meeting House with ghostly figures in period dress going off in one direction while others in colorful modern dress are entering.  The words stitched on it read “They led the way…We follow still.”  The recipient of the Citation for 2012 is a man who personifies that centerpiece.   He is a true bridge between those who founded the Assembly and established the values of our community and those who follow still.