Whistlers … whistlepigs … groundhogs … woodchucks.  Many names for the 3rd largest rodent in Michigan.  Made famous by the comical spectacle in Punxsutawney each February 2nd (and, reinforced by the clever comedy “Groundhog Day), woodchucks have been granted celebrity status in the United States.  Truth be told, they are lousy weather prognosticators, but still loved by everyone, except those folks who happen to share a residence with a family of woodchucks. 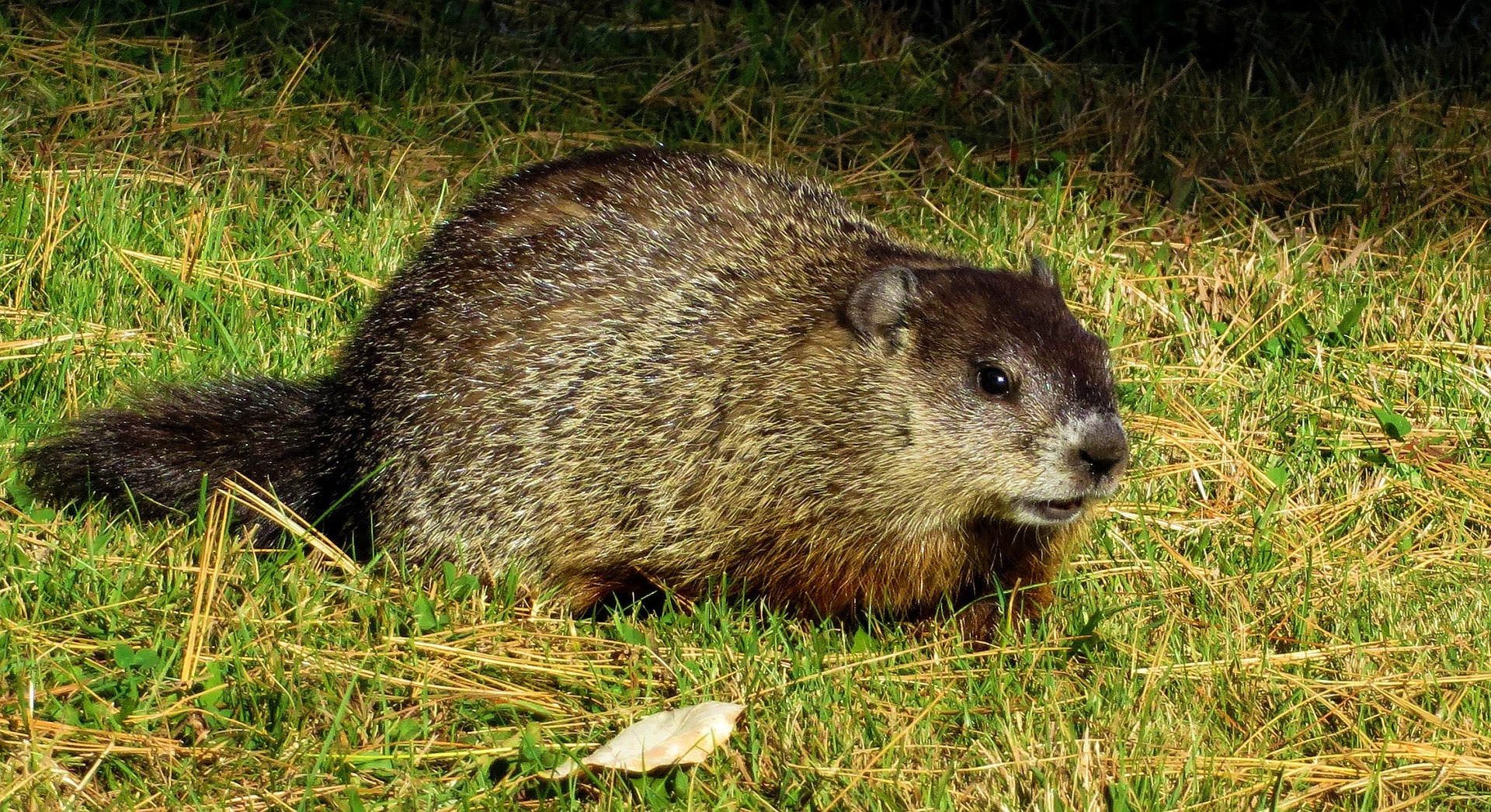 What they lack in meteorological skills, however, they make up with incredible digging and burrowing skills, with the same single-mindedness that beavers bring to stopping the flow of water.  Strictly herbivores, woodchucks love greens of all kinds and are especially fond of the same vegetables that many of us try to raise in gardens.  Hence, the rub.

They also love to excavate lawns, decorative berms and agricultural fence rows.  They can’t help themselves, you see.  “If you plant it, I will come and dig.”  “Field of Dreams” somehow left out the woodchuck parts in that film.  A woodchuck hole is a great place to sprain an ankle if one is not cautious about where to place a foot ... only thing worse, where they overlap, is a badger hole.  Speaking of the Wisconsin mascot, badgers are one of a small handful of predators which regularly prey upon woodchucks. If you think a woodchuck is a speedy excavator, you oughta watch a badger make the dirt fly as it digs into the turf for a well-fed ‘chuck that has grown fat on your garden.  Coyotes, bobcats, and foxes also take woodchucks when they can, and are the most common predators here in Benzie County.

Like most rodents, woodchucks are considered “of least concern” environmentally because, well, they are rodents and are prolific and widespread, despite the current use of herbicides and pesticides.  Like the rest of the world’s rodents, they have paired incisor teeth that grow constantly (in the case of a woodchuck, up to a ¼ inch per week), yet are worn down by their constant gnawing.

The titular nickname, “whistler”, comes from the woodchuck’s penchant to stand upright and emit a high-pitched whistle to warn other members of the family of a potential threat.  This behavior has been immortalized by the BBC with its series “Walk on the Wild Side” (seriously, go to YouTube and kill an hour or so of these ingenious clips).

Luckily for all of us, and for the woodchucks of the world, they spend their winters in hibernation, out of our yards and relatively safe from predators (except those darn badgers, they just don’t quit.)

Your dog is off-leash, attending to personal matters anywhere in the northern 3/4ths of Michigan.  You catch a glimpse of a slowly-shuffling creature at the base of a hollow oak tree and, a moment later, you hear Fido whine and your pup comes out of the shadows with a white goatee.  On close inspection, you find your dog has a chin-full of ivory porcupine quills and needs some attention.  (To avoid my penchant for taking off on tangent topics, I will refer to this outcome later.)

So, which of the two breeds of dogs is yours?  The first breed walks away from that encounter, shaking its head and thinking, “Holy cow, that smarts ... I’m never gonna do THAT again.”

The other breed shakes its head, licks its sore muzzle and whispers under its breath, “I’ll get that son of a gun NEXT time!”  And the next and the next, ad nauseum.

So how can anyone dislike a porcupine, AKA quillpig, with its Quaker-like aversion to violence?  A porkie shuffles through life at a leisurely pace, snacking on crabapples in the playground by the CSA Lake Michigan shore.  When a predator picks up the scent, be it coyote or bobcat or your trusty Labrador, the porkie might make a brief effort to flee or head up a tree.  But if caught out in the open, I figure the conversation goes something like this:

“Uh, you might want to think this over. You might hurt me, heck, you might even kill me, but you are going to really regret it. Why don’t you just walk away-”

“Well, then, take your best shot.”

Porkies have a huge range, including the prairies of North Dakota where there is not a tree in sight. Here, they like the woods, the hollow oaks and maples for daytime dens, given away by the enormous cascade of years of droppings at the bases of the trees.  They also have a love of our cottages, especially the older ones with big spaces in their foundations, where they can enter and gnaw to their hearts’ content.  It is an unnerving sound, listening to the joists of your floorboards being gnawed upon at 3 o’clock in the morning.  Porkies can chew through a flat sheet of plywood, savoring the adhesive which binds the layers together. You can almost imagine the satisfied “burp.”

During the 60’s and 70’s the CSA Tuesday night dances drew people countywide.  The building  hopped up and down on its supports to the scratchy strains of “Gimme Some Lovin’” and “Brown Sugar.”  The managing director grew concerned about the future of the floor, so, instead of canceling the dances, he commissioned a force of teenagers to reinforce the joists.  He bought a handful of huge 10” by 10” beams and concrete blocks, and we crawled the length of the building and fed the beams in, inch by inch, finally raising them on the blocks and shimming them flush with the rest of the supports.  I was at the far end of the building, sucking in the fine silt that covers the ground, trying to wrestle the end of the last beam up on the block, when I saw movement left of my head.  In the feeble flashlight beam I saw the southbound end of a northbound porcupine, grunting gently and slowly wagging that awesome quill-studded tail, 3 or 4 feet away.  Finding my own inner superhuman strength, I tossed that beam in place and did the world-record crawdad backwards scuttle out from under the building.  Problem solved.

Porcupines can not throw their quills.  Quills are highly-evolved hairs, up to 30,000 of them on an adult porcupine, each loosely attached to the animal.  Its most wicked weapon is its tail, covered in quills, each of them barbed, which it can whip in an instant and deliver a snootful of stings.  The quills, like our hair, continually grow and are replaced (well, not MY hair, but you know what I mean.)

Porcupine quills, if not removed, work their way deeper into the tissue. Hunting the prairies of North Dakota, a companion’s dog (example # 2 in the above discussion) took a serious bite out of a big porcupine.  We found a vet willing to re-open his shop for us.  He sedated the dog and performed the procedure.  He sent us on our way with further instructions.  “I left three quills  deep under the tongue … to remove them I would have had to keep her overnight.  Two days from now, spend a few moments stroking the skin in the soft folds under her chin. You’ll feel the quills poking through, and just grab them with pliers and pull them through.  She’ll be fine.” He was right, of course.

I’m happy to say that 4 of our 5 Labrador retrievers over the years have been Type 1 breeds.  Rooster, the kid at almost 2 years of age, has never had an encounter, and I hope to keep it that way.  In each incident, a dog emerged from cover with a white “beard” of quills under its chin.  Each time I pulled out my Leatherman tool, clipped off the end of the quills to deflate them, and then unceremoniously yanked them out.  Each time the dog looked in my eye as if to say, “Thanks, old stick, I’ll get back to hunting now.”

Managing problems with porkies and woodchucks is difficult at best.  Live-trapping either is really tough. Woodchucks eat everything green and vegetable, and seducing one into a live trap is an uphill battle.  Same is true with porkies - they mostly eat bark and willow scrub and chew incessantly on antlers and bones of animals which they find in the woods.  Poison is not a suitable solution to mammals of this size.  The best defense is a good offense, meaning take painstaking care to seal up the foundations of your home or cottage with chicken wire or hardware cloth.  If the problem is woodchucks burrowing under a deck or foundation, burying the first two feet of the wire can deter them from putting in the extra effort to get past.

With woodchucks, the coyote and bobcat is your best fall-back position for resolving the issue.  The only predator known to routinely take porkies without undue injury is the fisher, the large weasel of the far north, and we don’t have them around here.  As is true with many wildlife “problems,” often the best solution is to roll with it and enjoy the panorama which these creatures provide.

Oh, the answer to the quiz: a black bear, born in the den in February, naked, blind, weighing only ounces, is the smallest Michigan mammal at birth compared to its eventual adult size.